Paris Is Most Beautiful In The Rain 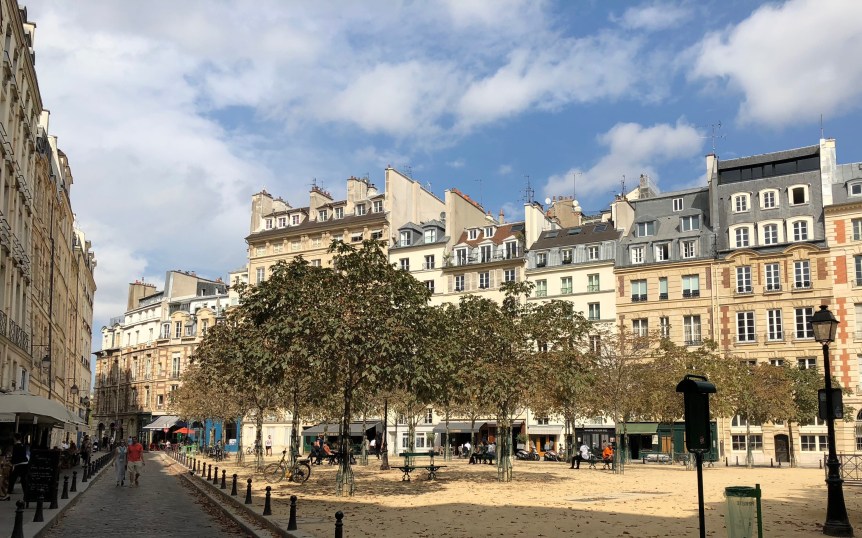 Paris Is Most Beautiful In The Rain

The day started with a quick walk to Angelina‘s for a couple boxes of hot chocolate, we’re thinking a Christmas Eve treat. The plan for the day was to rent a couple Bird scooters and head out and explore our way over to Ile de la Cite . Finding one near our apartment didn’t work out, but I was able to find one on the way back, I had a great time zipping through the Jardin des Tuileries.

Next off to breakfast, we were heading to a cafe we had read a good write-up on in a guide book. Guess what, we get there and its gone. Rick Steves strikes again, back to Eric Kayser. Thank God for Eric Kayser, if you have to have a fall-back breakfast spot, thats a good one to have.

We picked up the Bird scooters and headed down to the path along the river Seine. As it turned out the entire path is made of cobblestones, which makes for a picturesque path, but the tires on the scooters are so small that the bumps will nearly rattle your teeth out. Up the steps we carry them and start again on the sidewalk just above the river. Karen did great, she was cruising around people and obstacles looking like a pro. When we got to the Ile de la Cite we ditched the Birds in Le Square de la Place Dauphine, a beautiful little square surrounded by restaurants and interesting shops. We vowed to come back for lunch after we visit Sainte Chapelle church.

Strangely, Sainte Chapelle is located inside the Palace of Justice, a compound that is the main police station for Paris. Sainte Chapelle opened in 1248 after talking only 7-years to built, pretty amazing considering its nearby neighbor, Notre Dame, took nearly 400-years to complete. In its early years the church housed Christian relics which included the Crown of Thorns. Now it is most notable for its stained glass windows, 15 groupings standing 15 meters high, depicting 1,113 scenes from the Old and New Testaments. They are incredible to see, even on a cloudy rainy day, which ours was.

After Sainte Chapelle we returned to Place Dauphine for lunch. We settled in under the street side awning of Le Caveau Du Palais (17 Place Dauphine, 75001), we could not have asked for a more idyllic spot. We ordered a cheese plate and cold vin blanc, then watched classic French touring cars go through square. Almost as if on cue, it began to rain. We really enjoyed the rain, we heard so much about it in the movie “Midnight in Paris”. After experiencing it, we have to agree with Gill Pender, Paris is most beautiful in the rain. If you haven’t seen the movie, I suggest you rent it. As we sat there, an older gentleman approached with a bird in a homemade cage that was more for show than containment. It looked like a Cockatoo, which he promptly placed on Karen’s shoulder. She had mixed expressions of surprise, nervousness, and enjoyment. He spoke only French, so the conversation was mostly smiles and laughs. Much to my surprise, it wasn’t an act for a few quick euros, when I reached into my pocket, he smiled and stopped me, apparently he was just enjoying the interaction, much the same a us.

Before our last dinner in Paris, we decided to go to the Kult Hôtel (3 Rue du Pre’ aux Clercs, 75007) which we had walked by a number of times. It looked beautiful inside, and it has a full cocktail bar, something hard to find in a Paris restaurant. The hotel primarily caters to American tastes, not really what we were looking for in Paris, but the bar was well stocked, including Karen’s favorite, Teto’s vodka. I had a Manhattan, she had a martini, not too bad for Paris, but definitely not as good as the ones in our own back yard. The bartender was French, but he spoke English very well, he had gone to USC for a couple of years, picking up his cocktail skills there.

Off for dinner at Le Bistrot de Paris (33 Rue de Lille, 75007). A very classic and classy French restaurant, with the exception of our waiter, which was the fun part. He was born in France, then spent almost all of his life in Detroit, finally moving back a couple years ago to take care of this aging parents, who had since passed away. His plan now is to spend a couple more years in Paris, then move back to Detroit and open a French Cafe, keep and eye out for it. While he lived in Detroit they spoke only French in the home. When he spoke French in the restaurant you would’ve thought he lived in France all his life, but when he spoke English he sounded like some stuggie from Detroit. He found a great wine for us, Karen had rack of lamb, I had beef tartare. At the table next to us was a gentleman from San Palo Brazil, he connected a conversation between ourselves and a couple from Atlanta on his other side. It was a totally fun evening, we promised the Atlanta couple we would meet them in the same spot next year, except we would get the window seat.

I can’t believe we have to go home tomorrow. Lets not!!